My Audi A8L MMI was dead, stuck at open, black screen, doesn’t close, every time I push a device button or reset the MMI, MMI initialize screen would come  on, and went black, while it was on, I could hear the relay clicking in the trunk under the back seat.

VCDS scan would come up with: No communication with Head Unit, Optical Bus: open.

The culprit was the 5A yellow fuse was blown, I might have shorted the line somehow while working in the trunk. It did give me a great scare. 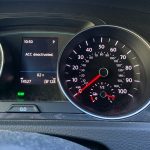 How To Charge e-Golf 90% Max Manually

Looking For The Best Audi A5 Convertible

What You Should/Must Know About Audi AC System

What you should/must know about Audi Electrical System