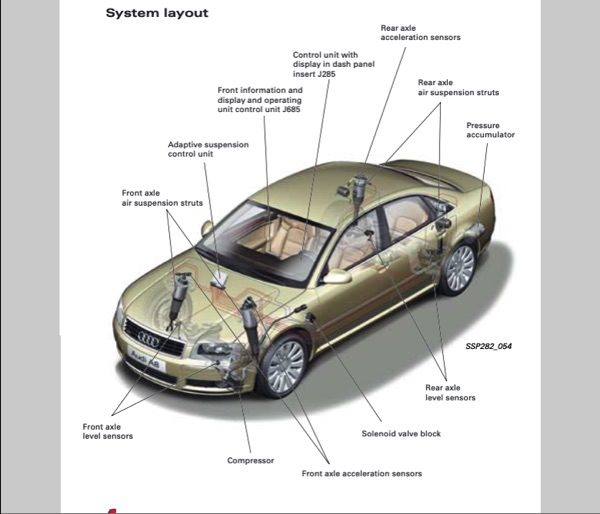 – Make sure the battery is good, charge if necessary.

–Put car on Lift mode – then on Jack mode – Leave it for a few hours.

-The side that’s lowered than others is the leak side.

-Remove Jack mode for the pump to work again to Lift mode, spray soapy water on top and bottom strut to see where the leak is coming from with bubbles. Watch the video on my left and right fix – my left side the leak was on the top, right side the leak was from the bottom.

So, I had both of the front air spring bags leaked and replaced at 119k and 131k miles. It cost me total of less than $400 for the 2 incidents. Since I’ve read and understood a little about the system that caused much pain and money for many people who have no ideas how the system works. Again, this is how I understand the system, many will differ but then again it didn’t cost me much and I didn’t even have to use OBD2 (OBDEleven, Carista, VAG504 or VCDS) to fix mine. I’ll explain and update this post as I have time. Most of people ruin a simple air bag replacement with costly blind folded, shotgun good parts due to misunderstanding the system or depending completely on the OBD2 failure scan. Note: @131k miles and 2 air bag leaked, I haven’t replaced anything like compressor pump, the valve block, level sensors or anything VCDS would print out. I don’t replace things unless it’s proven DEFECTIVE. The problem is you can’t ask the dealers or the shops to do it for you, they don’t have time and their job is not to troubleshoot the exact problem, just base on diagnostic software and replace all components reported which is the whole system.

The Air suspension control system consists of 4 air struts at 4 corners, an air compressor pump to a valve block distributor connected to 4 struts and an air tank. There are 4 level sensors for 4 struts and a controller. The controller is displayed on the MMI screen and control panel to select. There are 2 warning indicators on the dash board – = Over inflated and = Under inflated – When , there are 2 scenarios, the e-strut wires are not connected or the relief valve inside the air compressor is faulty – the air suspension is leaking. When the Air compressor temperature is hot due to pumping for a long period of time, the controller will shut it down, hence, in normal air leak operation, the Air compressor seldom a problem.

A8 Air Flow To The Suspension

A8 Air Release Out Of The Suspension