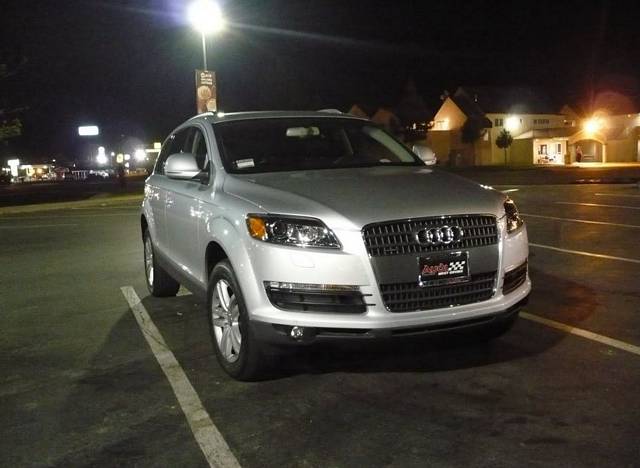 It’s been 10 years since we had a new car and now we have 2 kids, we decided to get an SUV with 7 passengers. After looking at the XC90, ML320/350 (2002-2003), CX9, ACADIA, PILOT, MDX we chose the 2008 AUDI Q7. We read, looked and test drove most cars for about 2 months, we found out that the European ride is what we liked and it’s boiled down to ML320/350, XC90 or the Q7.
-The ML320/350: length is short and with the 3rd seats hanging on the side which is not practical. They don’t make 7 passenger in 2008 and the users reviews are terrible, shorter wheel base, more bumpy ride.
– XC90 is good looking, but the quality and reviews are also bad, it’s shorter & narrower than the Q7. The 3.2L is totally weak and the price is almost the same as the Q7 with the 4.4L.
– My wife likes the Q7 because it’s wider, longer, sturdier and it has backup camera with sensors front and rear. The interior is outstanding. Everything in tight and solid, no cheap plastic any where and the quattro system is the one we’ve been using on the A8 & A6 when we go skiing. The XC90 Halex AWD system has been complained by users.
– It’s March 28,2008 we got a great lease from AUDI with the money factor of .00006 ~ .14% and we could get the car for 1000 below invoice because the dealer get 1500 incentive & 1000 rebate from Audi.
– There are many options on the Q7, the premium is a must, we wanted the convenience package & the panorama roof. Most of Q7s in California were fully loaded from 56-61k for the 3.6L. The options we wanted are for lower price Q7s, not many exist in CA, finally we found one Silver/black in Southern CA with all the options we want for a great price. The final configuration is Premium 3.6L + Convenience package + Pano Roof + 4zone.
– People were complaining about the pano roof only has mesh cover which the sun can shine through and heat up passengers heads on a sunny day. We found it a little over exaggerated, yes, it may be hot if 12 noon and 100 degrees out. We have not had the opportunity to test it out, but with 77 degrees and the sun is directly above us, it’s still fine and we love the sunroof. Until we feel the heat, we may have to tint the sunroof like a few owners did.

Bought online and picked up in Penske West Covina

On the way home at McDonald

Meet up with sibbling 98 A8 at home

Air Vents only exist with 4-zone

Air Vent for the kids on 3rd row

iPod tucked away under the armrest

First time in the snow

safe and sound in the snow

Q7 handles anything in the snow

Got the SUV for skiing

She’s always thristy for gas, if we have to worry about gas money, we can’t afford her… 13-18mpg. Her speedometer is also wrong.

The ride on the freeway is very comfortable, although it’s high and a little firm compares to the A8 or A6. The Bridgestone tires are much smoother than the Continental tires. They both come in the 18″ wheel on the Q7s, it’s depend on which Q7 you get off the lot. The tires are rated between 35-49 psi and most dealers set them @ 49-50, to me that’s too high, I set mine at 40-42. According to other owners, 44-49psi would make the tires last longer.

The interior is what gets us.

With the 4zone options, we get the separate controls for the rear AC/heat with memory, both 2nd and 3rd rows heat vents

All the vents on the pillars front and back

All weather mats are a must with children and snow

In her cozy bedroom with the family.

The Bose audio system comes with the convenience package which is very nice. The thing I like the most about the cd changer is that it plays MP3, since I don’t have an IPOD to hook up, I can load 6x700Mb = 4.2Gb/4mb ~ 1000 songs of music in this cd changer. The MMI can see all the folders and songs and it can shuffle through all the songs on all CD which you never have to hear the same song again.
The bluetooth is great, we paired both of our cell phones and who ever activates first wins. My Samsung & my wife chocolate work great.
People complain about the MMI is confusing, but if you know about computer and mouse, just apply the same logic and it’s very easy to operate.
We keep our car for many years and we are pretty lucky with Audis, they’re great and I hope we can keep this one many years since it got everything the wife needs. We just need to make more money to pay for gas…

There is no DVD system for this car. I’m in the process of designing a fixture for a 14″ laptop as a movies player for my kids in the back to watch on long trip. These days a laptop costs about $500 for 250Gb hard drive which you can store 250 MP4 movies with good quality. I’m not going to pay 2-3k for 2 7″ head rest DVD system.

Audi Q7 really made it easy for owners to play their music. They expect all owners should be hip enough to have at least 1 ipod and even NOT-so Hip one like me….