My Microwave & Oven wall mount combo is almost 30 years old and we got a good deal on a KitchenAid KEMC377KSS stainless steel for $1050 and we decided to give our kitchen a new look. According to the specs, the unit should weigh over 200lbs, to lift the old one out and put the new one in, we may need two heavy duty weight lifters which we don’t know any… I went to Harbor Freight tools and found the motorcycle jack and we did it without any problems.

***TURN OFF THE BREAKER FOR THE OVEN *** Make sure the power to the unit is off, turn the breaker from the fuse box to off, go out to the unit and turn it on to see that it doesn’t work…. NO POWER!!!!!! 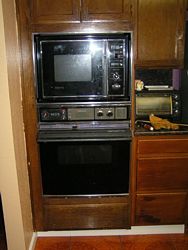 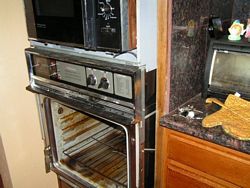 We start to remove the door, the control panel to access the wirings and 4 screws that securing the unit in place and we can get the unit to slide out.

We start to remove the door, the control panel to access the wirings and 4 screws that securing the unit in place and we can get the unit to slide out.The next thing is to position the jack in place, it works wonder and it’s only $59. 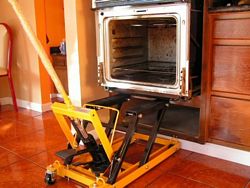 We secured the jack with the 2 pins all the way to the floor to stop the jack from moving while we sliding the oven all the way out. 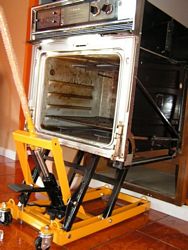 Release the securing bolts and pull away the old heavy unit. The old cut out is 1/2″ narrower and 6″ higher than the new unit. Therefore, we have to cut the side 1/2 inches with our circular saw. The wood is so good that it took me a while to cut it out. The noise was unbearable and the wife and the kids had to go upstairs and I had to wear earplugs and nose protection from the wood dust. 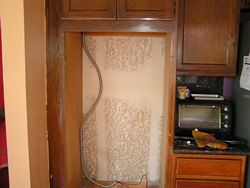 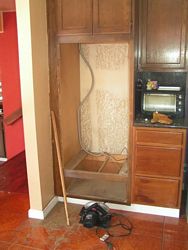 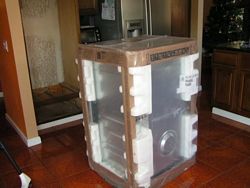 Follow the instruction, we remove the door and prep just like it recommended very carefully since it’s sooooo new and shiny.This unit also has 4 wires, the same as the old one. Since we don’t have the junction box on the new unit or the old wall, I bought a box so I can put all the wires inside and close it with the lid. 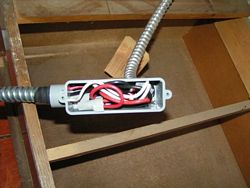 Now we tilt the new unit back and slide the jack under it, make sure the bottom rest evenly onto the jack rubber part. Jack it up just like when you’re removing the old one to the height required and start to slide it into the case. 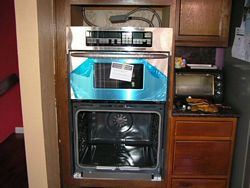 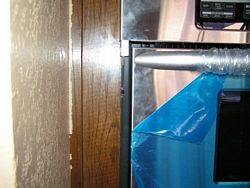 Slide it all the way back and secure it with 4 screws that come with the unit.

Install the rail covers, the vent cover and the door and turn on the breaker, test the unit as the instruction described. 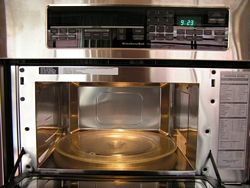 Wow, it works…. It’s not a faulty unit. It would be a pain if we have to take it out and exchange for the new one.The unit is beautiful and everything works great. The water gets hot in 2 minutes, the oven turns on bake & broil with convection nicely. We tested the oven the same day and it cooks faster than our old one…. almost 1/2 hour bake time. We will surely save money on electricity there. WE LOVE IT!!!! 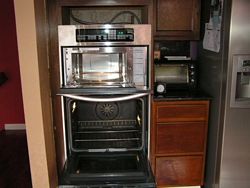