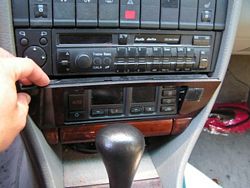 Entering anti-theft code
The following is the procedure to re-activate the radio if the display shows “SAFE”. It is important that the procedure be followed in the correct order.
1. Turn on radio. The radio display shows “SAFE”.
2. Press the FM1/2 and DX buttons simultaneously and hold until “1000” shows on the display. Release the buttons. Do NOT press these buttons again, otherwise the radio will consider “1000” to be the code.
3. Use Preset buttons 1 … 4 to enter the four-digit code number from your radio card. Preset button 1 corresponds to the first digit, Preset button 2 corresponds to the second digit, etc. Each press of the button increments the number by 1.
4. Once the code shown on the display is correct, press the FM1/2 and DX buttons simultaneously and hold until the word “SAFE” appears in the display, then release the buttons.
5. The radio should unlock and be usable shortly afterwards.
6. If an incorrect code is entered, the word “SAFE” appears, first flashing and then continuously. You can repeat the above steps to unlock the radio once more, the number of attempts will be shown in the display. If an incorrect code is entered again, you radio will be locked for about one hour. After one hour – the radio must stay on and the key must remain in the ignition lock – if the display goes out, the you can repeat the above procedure to unlock again. The cycle – two attempts, one hour lock-up – still applies.
7. If you lose your radio code, contact your Audi dealer or sometimes it’s under or behind the radio itself. Remove the radio and look.
GALA

1. Turn off radio.
2. While pressing and holding the TP button, turn on radio. “GALA” will be shown in the display.
3. To select the speed at which GALA activates, press the tuning up (up-arrow) or tuning down (down-arrow) buttons to the left of the volume control knob. The display shows the following: