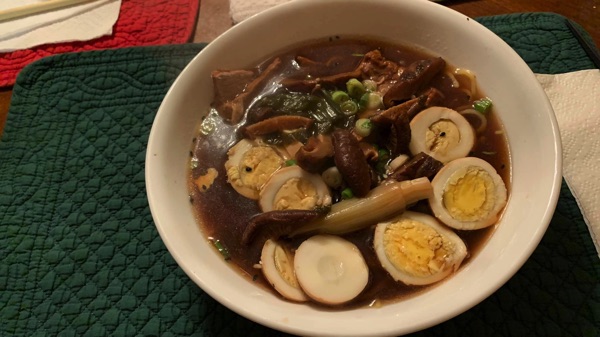 My kids keep asking me to take them out to eat Japanese Ramen, I think it’s quite expensive and tasted OK with the stuff they served but nothing special. Many ramen shops like instant noodles. Near my house a newly opened Japanese market, my wife and I stopped by, to find ramen broth, it has many types, from small to large, from cheap to expensive. I bought a small bottle on sale for $6. Go out to frozen ramen instead of dry, and buy a big bag for $6. The wife laughs, how can it be so cheap? I also laughed and said we did not try yet, we won’t know. Going to the safeway today to buy pork chops $.88/lb. Back to cook LOL.
Read the instruction, one part broth is 6 parts water. Frozen ramen must be taken out to harden, left in the morning in the refrigerator, and asked for 4 hours by the mother-in-law to take it out to cool.
Pork chops cut a few pieces, fry on both sides until golden with a bit of oil and garlic until fragrant, pour a bowl of broth and 6 bowls of water in the meat fryer. Cut the green onions, put in the shitake mushrooms, put in the hard-boiled eggs, a little brown sugar, sesame oil. Bring to a boil, then lower heat until the meat is cooked and absorbed. The water now tastes so good. My wife tasted it and liked it.
My wife was afraid that my children could not eat boiled meat, so I made tonkatsu for them, I did it.
Now for ramen, at room temperature it was soft and edible, but I boiled it with broth for 30 seconds just hot enough to take out a bowl.
Just like that, add the broth, sprinkle both yellow and black sesame, cut seaweed and put it in.
The kids and their wife ate all the cypresses, each with a big squeeze LOL. I drank all the water, it was better than the restaurant I ate at. Cheap, delicious, and lots of meat and eggs. For the color not to be so dark, don’t use dark soy sauce to saute the pork.