Getting more out of every drop of petrol: FSI® technology successfully combines low fuel consumption with an engine characteristic that delivers high performance and agile responsiveness.

With FSI technology, fuel is injected directly into the combustion chamber. The injector regulates the amount of fuel with millisecond precision at injection pressures of between 30 and 110 bar. During the injection process, the evaporating fuel has a significant cooling effect on the cylinder charge. One effect of this is to increase cylinder charging – resulting in a corresponding increase in engine power output. In addition, the engine’s tendency to knock is reduced by the cooling effect. This reduction means that the compression ratio of FSI engines can be considerably higher than on engines with conventional injection systems.

The engines of the FSI family are fitted with a two-stage variable intake manifold. The power mode (short duct length) at high engine speeds contributes to the high specific power output of the engines. At low revs, the “long duct length” is selected instead, increasing the maximum torque by more than 15%.

With the aid of a flap system in the intake duct, the in-cylinder flow can be optimally adjusted. In part-load operation, a strong flow ensures low fuel consumption and low exhaust emissions. At full load, the air is drawn in with minimal losses, meaning that torque and power output are increased.

The latest generation of V6 FSI engines is equipped with the Audi valvelift system. This technology provides intelligent control of the intake valves. This consequently increases power and torque while reducing fuel consumption. Audi already employs this innovative technology for its direct-injection V6 FSI engines with 2.8 and 3.2 litres displacement.

I’m thinking about getting an A8 with FSI, it doesn’t have timing belt any more, timing chains would last longer. 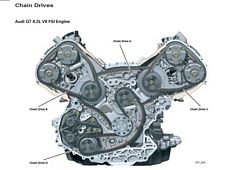