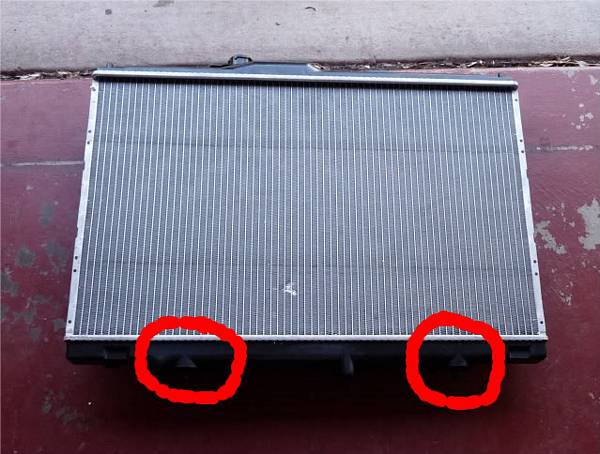 This was the way I’d done mine, please use the information below as reference only and be safe.

This is how I fixed the over heating problem at high speed, stop and go on a hot day for 1997 Honda Odyssey after the car was replaced by the shops with $600 distributor, $1500 rebuilt head which never fixed the original over heating problem @290k miles.
Ordered a brand new New radiator $65 shipped (ordered Monday, received Weds for the weekend).

first we need to remove the engine under cover with 10mm socket wrench, there are also 2 on each side in the wheel wells.

Remove bottom fans bolts (x2 for the passenger side & x1 for the driver side).

Unplug fan electrical connections and lift the driverside fan out then passenger side.

Remove the bottom hose and oil lines (x2 arrows), the clamps are hard to remove, use long nose pliers to remove them, the best is to do it from under the car.

Lift the old radiator out

At this time, if we need to replace the front Torque Engine/transmission mount, buy it and do

it now since we have room. Broken torque engine mount looks like this, good one like this.

Go inside the car and flip the heater lever to ON position, remove the heater intake line.

When the water stop dripping out of the heater valve, then it’s time to put back the radiator, heater hose and fill up with coolant. Since we don’t drain the engine coolant out of the engine, we assume it has all clear water, pour in 1 gallon of unmixed coolant first.

Remove the 2 rubber bushings from the base of the old radiator and put them into the new one before placing it back.

Again, putting back those clamps on the Oil lines are very hard, the best we found is to have the tool or using the big long nose pliers from the bottom of the radiator and NOT from the top. We did make many nicks and dings on our hands and the radiator by doing from the top.

Make sure the engine reaches normal operating temperature, the fans will go on/off, NO LEAKS anywhere, oil & coolant at the bottom of the radiator.

Check the ignition timing if we have a timing light. The left mark is correct timing, the right mark is the TDC.

Test drive the car for a few miles. Wait for it to cool down, open the radiator cap and check for the coolant level, top up if necessary. Put back the bottom engine cover.

So, it was a simple and inexpensive overheating fix which dealers, independent shops recommended with expensive operations because the car has 270k miles. Yes, it’s normal for people to agree because the Honda can’t run too many miles without having spending lots of money for maintenance. Yes it can, it’s the little engine that could. After spending over $2k and the overheating problem still exist, the brain dead and irresponsible shop owner didn’t even recommend the radiator replacement. Like I said, until you take control of your stuff, being uninformed will cost you dearly.