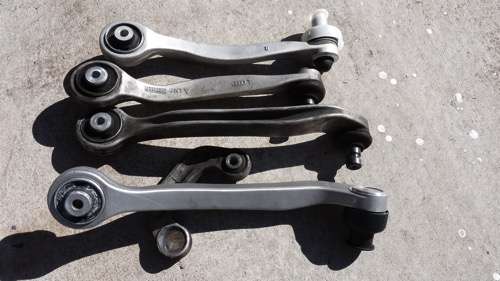 12/16/2017 – Due to the tires worn out on both inner/outer – I decided to check the Control Arms since they’re both Karlyn. Anyhow, it turned out still GOOD. It must be the alignment. I bought the CA from FCPEuro just in case they failed, returned it with full refund without any problem – just the cost of UPS to ship back was outrageous… Great company.

In attempt to eliminate the suspension noise from backing out of the drive way on the cold days, I bought some upper control arms and stabilizer brackets and replace them. This is how I replaced mine. I’m sure there are many ways to do it. The procedure is very straight forward, except for the bolt that got stuck until we lower the shock assembly down to clear it. All bolts and nuts use 16mm size wrenches. It’s also more convenient if we remove the whole strut assembly to replace both upper control arms.

All components were bought from FCPEuro.

9 thoughts to “Replace Upper Control Arms On A8 D3”