Things We Should/Must Know About Our Audis In Case Of Emergency – Audi | dognmonkey.com 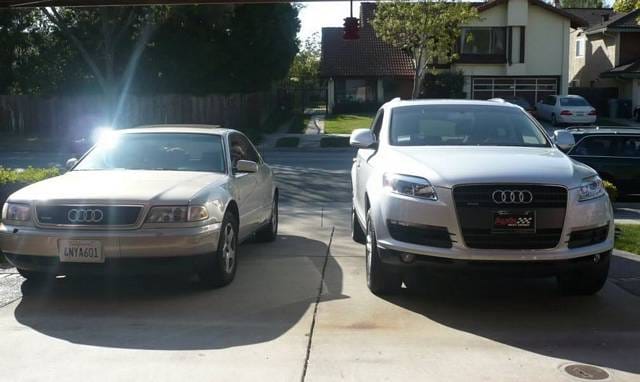 For an Audi Specific Problem – is a great place to find a solution, but you must know how to search for your problem.

If you own 2008+ Audis, you can access in case of emergency if you don’t have one in the car, you need a VIN# to use.

***Never jump start on any Audi by connecting jumper cables directly on the battery terminals – This will kill the ECU – Always Positive (RED) to the + of the battery and the Negative (BLACK) to a body chassis (GROUND) – Normally Audi cars should have a Negative POST next to the battery (A8) or jumper posts in the engine bay (A6 & Q7) – Make sure the service people know when they come to rescue your car stranded anywhere.***

A8 D3 Fuse Box (passenger side) To jump or charge the battery on the A8 D3 (2004-2010), never hook up the negative end directly to the battery negative post, only on the car negative pole just like the picture below. One good thing/bad thing about Audi cars is most of them only have 1 drive belt for everything beside the Timing belt. This belt will drive alternator, power steering pump, etc… Sometimes when the belt broke, we should know how to replace the belt on our car. It’s a good habit to have a spare in the trunk on a long trip. Since the belt drives so many pulleys, it’s good to know the diagram of the belt mounted and rotation. All serpentine belts have the belt tensioners need to be released to remove the belts. Audi transmission is in Safe (Limp) Mode: Operates in 3rd gear only.

We should learn all Audi switches and buttons.

Sometimes, in case of emergency like needing a jump on battery or tow, we or our spouse may not know where all these important stuff are. These are the little things we should/must know about Audi cars.
* If we have a Quattro (All Wheel Drive) Audi, we need a flatbed to tow our cars. When we take the car to get smog check, most or all of the time, the tech should know we don’t need to test on rollers because it’s AWD. * Most of Audis have batteries placed any where but front engine bay, except our 04 A4 Cabriolet, so when we need a jump from another car when the battery is dead or low, we need to locate the jump posts in front or battery itself if it’s in the trunk.

* Power steering fluids are mineral (green oil), the safe one is Pentosin 11s, so don’t just put any power steering fluid in it. The best is to get one of these cans on line because we may need it sometimes, especially if the car is over 100k miles.

* Locate the fuse box on Audis cars: A4, A6 is on the left of the dashboards, A8 is on the passenger footwell right (there is a screw knob), and Q7 are on both left and right of the dash board just like the A6

* We have 4 cars that have all batteries placed in all Audi possible locations, so they can be a great examples for Audi’s owners.

A6 battery under the seat 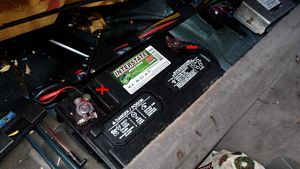 96 A6-The battery is under the rear passenger bench seat, therefore, it has the jumper cable posts in the engine bay. If we need to replace the battery, we just have to remove 2 screws holding the seat to the floors and lift the seat up. 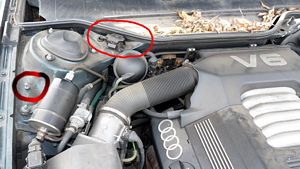 The most important thing when putting jumper cables on the car, RED (+ positive) and BLACK (- negative) on both cars while making a jump. Lift the black plastic cover, we should see a metal terminal where we can clip the RED positive cable on to it. 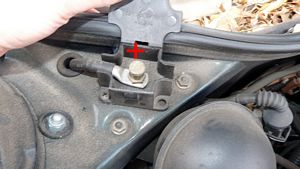 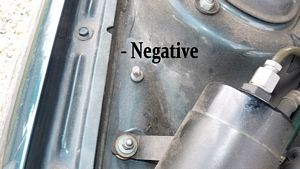 98 A8 D2 battery is placed in the trunk on the right handside. Since the battery is easily accessible, there’s no engine jump terminals that we know of, so when we need a jump for our battery, we use the battery location for jumper cables. 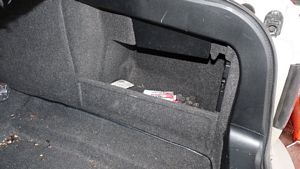 Again, most terminal post should have a plastic cover to avoid accidental short from metal objects to the ground (negative) terminals. The Ground (Negative) terminal is exposed, this is where the black jumper cable should clamp on to in case of battery jumping. 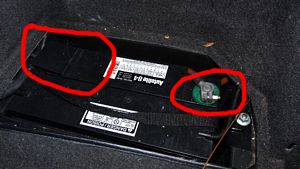 Positive Terminal is where the RED clamp should be on. 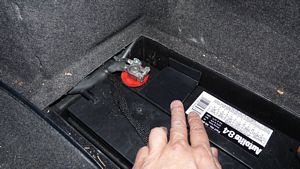 We need to locate all the fluids indicators and stick to check. The coolant is red (we use prestone red coolant instead of the dealer’s), power steering is green (pentosin 11s), and the engine oil dipstick is orange (our little ring broke off).

Again, Our Q7 battery is placed under the seat. Since the battery is NOT easily accessible, there are engine jump terminals for jumper cables. 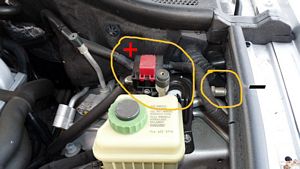 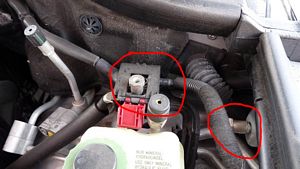 Q7 coolant reservoir is on the passenger side and the cap needs to be removed to check for the level. The coolant has to go up to the max mark. Again, most positive terminal posts should have a plastic cover to avoid accidental short from metal objects to the ground (negative) terminals. The Ground (Negative) terminal is exposed, this is where the black jumper cable should clamp on to in case of battery jumping.
We should know about our cars even though we may not need to use these emergency services ever… 🙂 idog