Time does fly by quickly, it’s time for Audie to say goodbye to her wonderful Ardenwood Elementary and starts a new educational chapter at Thornton Junior High. We both took the day off to attend the Promotion. It was well organized, the principal did give a very warm farewell speech. Everyone seems happy and sad at the same time. Friends who are enrolled in different classes in the new school based on their academic abilities, advanced, elite or normal, although they may see each other in the new school, but I doubt they would stick together. It’s life.

One thing we both notice was the class promotion speeches from each class, the first 3 was outstanding, well written and performed, heart felt and humorous, but the last 2 classes including Audie’s were NOT so exciting and humorous, quite dull. Later I found out the chosen one might have chosen due to political influence. I chaperoned the class many times and got to know many humorous and smart kids in the class, anything would be better than the one was chosen. Anyhow, politics exists everywhere, we wouldn’t be surprised it did in Ardenwood Elementary. 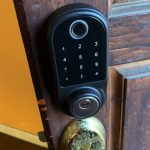