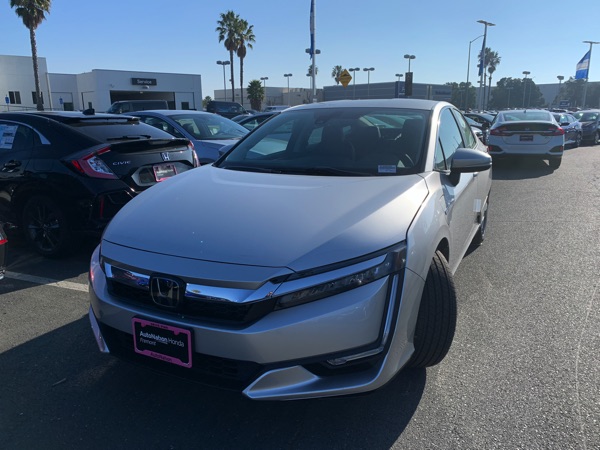 These days EV (Electric Vehicle) are being made by all companies to compete in the clean energy war. Many people need to drive long range and feel more comfortable having a hybrid (electric and gas motor) to be safe while traveling, I’ve looked at cars now called Plug-In Hybrid which have electric motor and gas engine, the difference is Plug-In Hybrid battery can be charged and used to drive electric motor until it depletes the battery then use the gas engine to drive the car in hybrid mode. In hybrid mode, by different designs, under a certain speed or stops, the engine uses battery and shift to gas when the speed becomes higher. The difference between hybrid and plug-in hybrid is the plug-in hybrid considered to be EV and get the Federal $7500 and some states rebates also ( and ). The plug-in hybrid need to be charged when the battery is depleted. If you use Honda Clarity Plug-In as a commuter car, it can drive with electric power for 47 miles at full charge before it uses the gas engine, so if going to/from work distance of 23 miles each way, you may never have to use any gas every day. In case you need to go a long trip, the small engine with 7 gallons tank will take you approximately 450 miles. There are 3 Clarity Series, so watch out, Fuel Cell, Full Electric (89 miles) and Plug-In Hybrid.

The only thing that prevent me from making the decision is the design of the car, to me it’s not very attractive and especially the rear wheels well, what’s with the covers? For some reasons, most of the Japanese EV these days, don’t look every attractive.

I went to test drive the car at Fremont Honda, the car is quite spacious, comfortable and have all the safety and convenient features: Adaptive Cruise with lane assist, Apple CarPlay/Android Auto, Front and Rear collision sensor and warning, back up camera on the base model. The side spot warning doesn’t exist, but it has camera for you to see the side of the car before you change lane on the passenger and not driver side. Some dealers are discounting the car up to $6000 which would bring the selling price to a very attractive entry point- If you pay federal tax more than $7500, you would get a full refund of $7500. The sticker price for the base model is $34000 – $6000 (dealer discount) – $7500 – $1000 (CVRP) – $800 (PG&E). You although will pay the tax on the final selling price of the car.

For charging at home, check the battery on the Plug-In capacity, level 2 charger at home can only charge normally max at 7.2kWh. For Honda Clarity Plug-In Hybrid, it’s 17kWh battery, you can almost fully charge the battery in 2 hours.

Some Plug-In only get $4500 from federal and less on CVRP – Check before you buy.