2014-06-30 The Smart hub on Samsung is doing very well with Netflix until some updates clear the Internet country code and Netflix no longer loads. This is how to fix the Netflix in Samsung Smart TV NOT loading.

We always trust Costco when it comes to electronics stuff like TV prices to be the lowest, but we found out that Walmart actually sells electronic stuff cheaper than Costco. Our 7 years old 40″ LCD is degrading, sounds and pictures don’t match with OTA TV. There’s a pink line running down on the screen. It’s time to get a new TV. As usual, we check Costco Online for members only, these days, you have to log in to see the prices (it’s a little annoying but marketing wants it that way). OK, we logged in and found a great price for UN46EH5300F model – We wanted Smart TV, we don’t care about higher refresh rate like 120hz or 240hz these days.

We’re going to purchase online, but I also like to check Walmart because we got some Nintendo 3DS XL for the kids with very low prices before and we were amazed what Walmart can sell for the same product, $100 cheaper than Costco’s. Yes, there is a tiny different on the model name with/without “F”. We read online and found the specs are exactly the same. 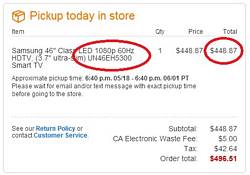 We ordered online and make sure the unit was NOT REFURBISHED and it’s actually brand NEW.

The TV is beautiful, the pictures are vivid and clear, WIFI works right out of the box and stream Netflix effortlessly. We plugged in a USB hard drives with movies on it, and the software plays MKV, MP4 without a hitch. My wife complains that the OTA channel like 5 stuttered sometimes which never happens on the 720P Samsung we bought 7 years ago. I think it’s the 1080p that causes the problem, we may have to get a signal booster of some sort.

I think it’s a good practice to check prices on the net before purchase anything from Costco, Walmart has been proven 2 times having better prices than COSTCO.

Why You Should Not Buy Cheap BMW i3 Used